Want the playbook for building a scalable (and lovable) technical training program?

Look no further than MongoDB.

With more than 8,300 customers across 100+ countries and over 45 million downloads, MongoDB is the open source platform that was named the database developers most want to work with.

Among many other things, MongoDB is renowned for its online training program, MongoDB University. The university offers certifications and free online courses to train developers and engineers to build with MongoDB. In 2018, MongoDB University announced a major milestone, having eclipsed over one million student registrations.

We spoke with Shannon Bradshaw, MongoDB’s Vice President of Education, to learn more about the journey behind MongoDB University’s success.

Founded in 2012 by a team of five, MongoDB University is now managed by a team of more than 20 and has seen rapid growth since its launch.

“We started MongoDB University to make it as easy as possible to learn how to use MongoDB products and services anywhere in the world for free,” says Bradshaw. “A guiding principle of MongoDB is to get everything we can out of the way of developers so they can focus on building great apps.” One of the key areas that the team focused on was training.

At the time of University’s launch, MongoDB already had a team dedicated to training customers. “But in-person training isn’t easily scalable or as flexible as some organizations require,” says Bradshaw.

“If you really want to scale people’s abilities to learn how to use your technology, then online education is a great way to do that,” says Bradshaw. “We want to make it possible for you to learn how to build apps with MongoDB, whether you want to train a new team member, a whole team, or an entire engineering organization. We also want to enable individuals to learn MongoDB whether they are students, hobbyists, or someone with a specific project in mind.”

MongoDB chose to power their online learning program with Open edX, an open source platform for delivering online learning. This decision afforded the team the scalability and flexibility they needed to deliver high-quality MongoDB training.

A channel to attract new customers

Bradshaw shares that the free high-quality content provided by MongoDB University became a compelling channel for developer marketing, as well as identifying and acquiring prospective MongoDB customers. Bradshaw says that the online program “contributes leads that account for 15-25% of our bookings every quarter.”

Contrary to what some might believe, Bradshaw reveals that the free training courses offered by MongoDB University did not cannibalize their paid training business. In fact, the free courses complemented and accelerated the demand for MongoDB’s paid offerings.

“The easier it is for your customer to use what you’re trying to get them to use, the wider spread adoption will be, and that leads to more business,” says Bradshaw. “In our case, it led to not just more support contracts, but also more training business. We can use MongoDB University as a way to bootstrap a new customer relationship and fill in some of the gaps in their team’s knowledge.”

Bradshaw shares that MongoDB University also serves as a relationship builder with the MongoDB community.

“One of the real takeaways that continues to be true is that the broader community loves MongoDB University.” Bradshaw says, “Our customers see MongoDB University as something that sets MongoDB apart — they really value how much we care about making it possible for teams to enable themselves on our products and services.”

The free online courses also serve as a feedback mechanism for the MongoDB team with their users. “Throughout a course, the learner is constantly interacting with us. We, in turn, are able to identify gaps in our course content and inform our future courses. A lot of conversation takes place, and that helps us contextualize our curriculum, making it easier for us to teach engineering teams how to integrate MongoDB with their existing toolset,” says Bradshaw.

The impact of MongoDB University

At its launch, MongoDB University began with one course for developers and one for operations engineers. Today, MongoDB offers 11 free courses plus two officially recognized certifications for learners to become a MongoDB Certified Developer or MongoDB Certified DBA.

Bradshaw says, “We use it extensively to train our own new hires. Every single engineer who joins MongoDB completes courses on MongoDB University, and we have over 500 people in our engineering organization. Everyone has gone through three weeks of online training plus one week of in-person deep dive training.”

The MongoDB team also replicates that onboarding model with partner organizations. One example Bradshaw cites is the company’s relationship with Infosys, where they’ve developed a Center for Excellence. “The initial group [at Infosys] went through a “train-the-trainer” program that began with several weeks of online training, a certification exam, and in-person training on how to train their people on MongoDB. Now, several thousand engineers within Infosys are trained on MongoDB.” 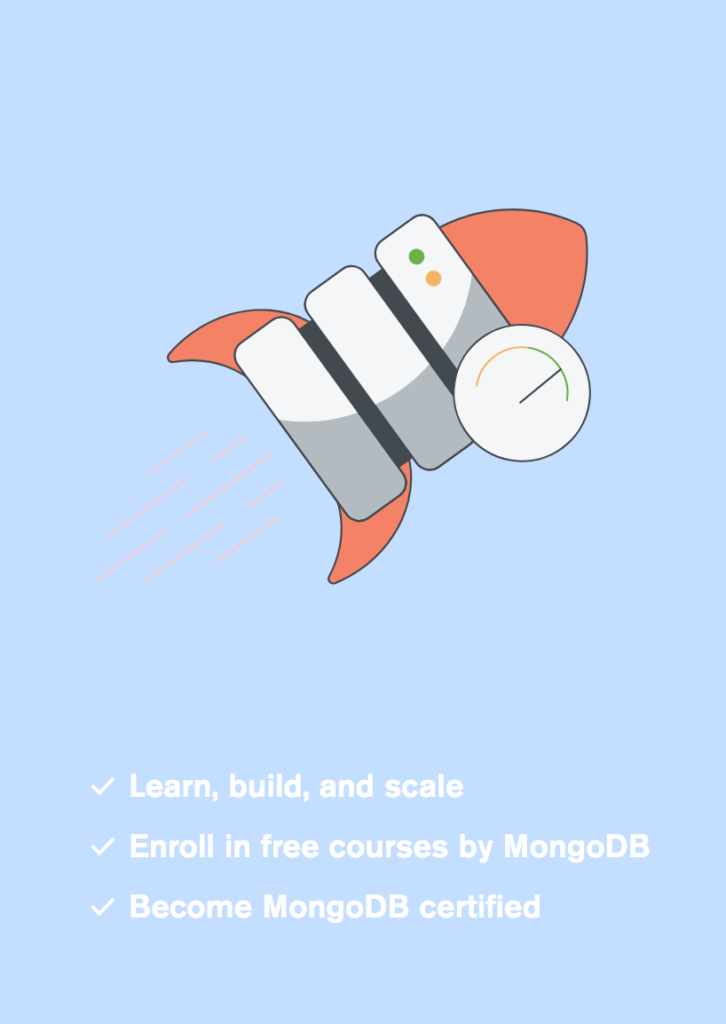 Advice for Building Your Own University

Bradshaw shares that in order to build a truly successful online-ed program, education teams need to take a content-first approach.

“The most important aspect of the entire endeavor is that the curriculum needs to be excellent,” says Bradshaw. “You have to go into it thinking about what learning outcomes you’re targeting, and you need to be genuine in your approach to teaching the community about your technology. If your content comes across as marketing and sales, it’ll be rejected. People won’t pay attention. If your curriculum is second-class, your community won’t engage no matter how slick the courseware is.”

“As long as you’re providing high-quality educational content, your learners will put up with hiccups in the user experience in order to learn. Focus on creating a great curriculum,” says Bradshaw.